Henry was supposed to be our rainbow baby, the calm and light after the raging storm that was Rory but he wasn’t and he has brought a storm of his own. I am angry that we didn’t get our rainbow, our happy ending to a turbulent year. That’s the thing though, whilst many do get their rainbow there are others like us who don’t. Some days I nearly understand why and think perhaps we have been dealt this hand because we are strong and can cope but then other days I am incredulous at the fact we have lost two babies – it just isn’t fair.

What I have come to realise over the last few days is that we actually have a rainbow baby in Toby who arrived after 5 long years of trying for a baby, countless appointments, procedures and thousands of pounds spent. When he was born he was just a baby, and a difficult one at times. I struggled with the culture shock of wanting a baby for years and then finally getting one – it was hard and it still is. Looking back, I never truly accepted that we wouldn’t have a baby and I think that has made me take Toby for granted rather than cherish him like no other.

I need to make it clear though, Toby is no miracle, he was made with the help of science and our determiation. When we told people Henry was poorly they said they would pray for a miracle, whilst this sentiment was appreciated I decided that I didn’t believe in miracles, I believed in science and science told me our baby was going to die, no miracle was going to change what we had seen on the screen in a darkened room.

Losing Rory and Henry has taught me that nothing is guaranteed in life and we should make the most of every day. If Toby asks for one more cuddle he gets it as I’ll never have that moment again, not with him and not with his siblings. He is growing up so fast and it hurts that we can’t do it all again, his first milestones will also be the last we see, never to be repeated by Rory, Henry or anyone else in our little family.

Thank you Toby for being the rainbow I didn’t know I had, you are my light and my joy every day, even when you are being a bossy stroppy so and so! 💙 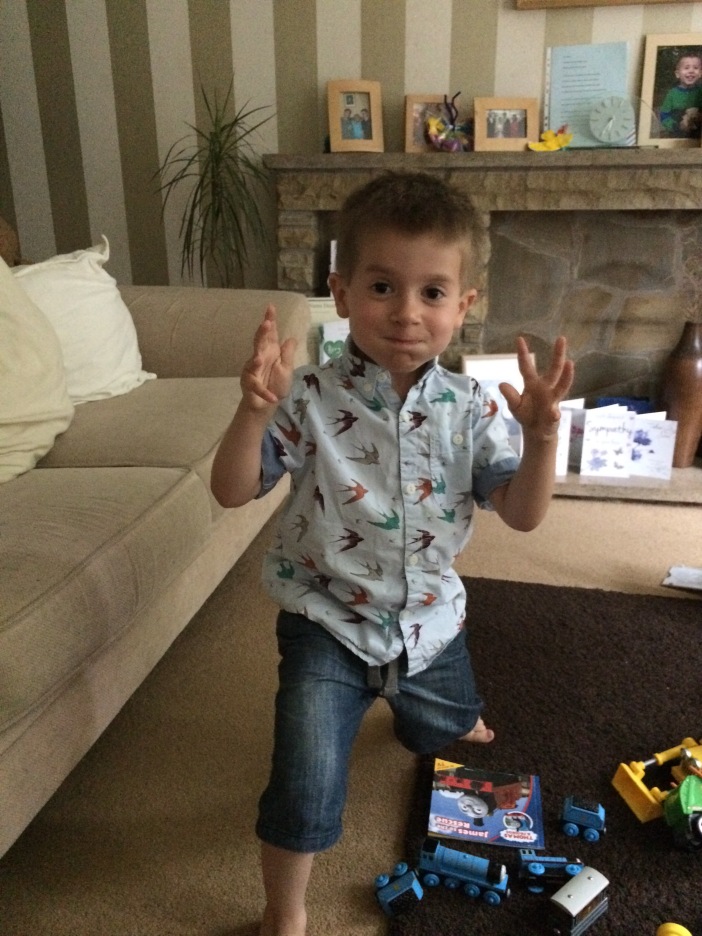 This time last week we were preparing to go to hospital to say hello and goodbye to Henry. Sunday being Matt’s birthday and Father’s Day made it all the more poignant.

In my heart I knew Henry had already gone, his movements had slowed right down since the Friday morning and I’d felt very few on Saturday, if any. I was happy that he had made the decision for us as it made going in for induction easier to live with but I was so sad because he wouldn’t be eligible for a birth and death certificate. Babies born sleeping before 24 weeks are classed as a late miscarriage or a non-viable foetus but he wasn’t either of those, he is our baby boy. Despite not having official paperwork to prove his existence he lived inside me and he was real and I gave birth to him.

When we arrived we said we were booked into room 1, the receptionist knew what that meant and took us round to the labour room for people like us. Later that morning a saw a sign go up on the frosted glass window. It was a butterfly, the unofficial symbol of a baby who can’t stay. I was grateful we were not in the HDU room next door as that is where Rory lived and died 15 months ago.

The day was long and heavy, my labour was 18 hours, longer than Toby and Rory combined – this baby boy was making me work! We made it clear we wanted him to be born that day and so with some determined pushing Henry was born at 11.45pm and given his daddy’s name as a middle name to mark the day he was born and the connection they have.

Henry was taken off for a bath and to be dressed in the little gown we’d chosen earlier that day. The lovely midwives also took his hand and footprints for us. When we were ready to meet him he was all peaceful and beautiful. A tiny scrap of a baby weighing just 245g.

A very special midwife called Margaret was there when Henry was born; she was a joy and kept our spirits up at an impossible time. In the morning she came back at the end of her shift and asked us to keep a special place in our hearts for her to love Henry that little bit more and we will, we always will.

No midwife goes in to work wanting to deliver a dead or dying baby, we are forever grateful to people like Lucy, Margaret and Alison who helped me through labour last week. 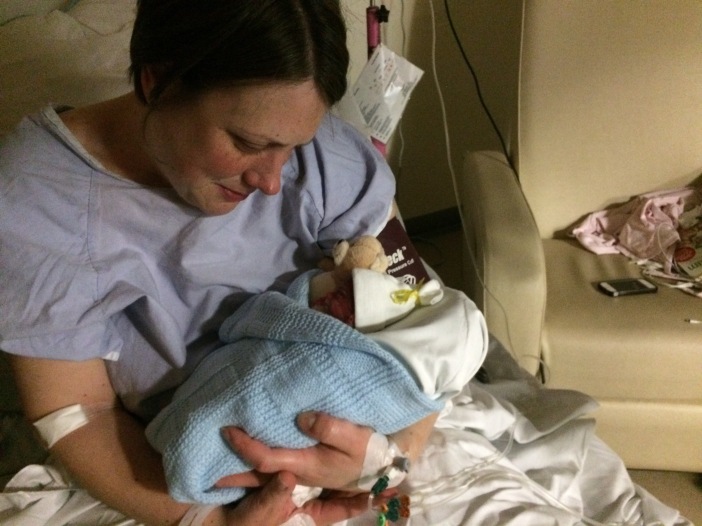 It wasn’t all about brexit on Friday 24 June (don’t get me started on that!). On Friday evening we held Matt’s 40th birthday party as planned. We debated about cancelling it when we knew the pregnancy wasn’t going well and again when we were told Henry was probably going to die but we decided to carry on as some fun was needed in our lives and everyone else’s.

Tonight it wasn’t about me, or Toby or Rory or Henry it was all about Matt!

Mr P bloody deserved his party not just because of the last week but because he is my rock, my world and my light. I’m not easy to live with at times and that man has the patience of a saint. He is kind, caring, funny, silly, great at numbers and an amazing daddy to Toby, Rory and Henry. He is my calm and I am his crazy.

I didn’t have a great day on Thursday but just being near him balanced me. That evening it hit me how much I need my husband and how much I take him for granted.I don’t say thank you to enough so here it is; thank you Matt for being you, for looking after me and our boys – we love you to 100 plus infinity.

I’ve been erratic with my posts during the first 6 months of the year. I found it very strange being pregnant whilst still wishing Rory was here with us. I felt like a fraud to grieve and miss my second baby whilst carrying my third.

My head was full of very conflicting emotions. I desperately wanted my new pregnancy to fill the gap left by Rory but in truth all I wanted was Rory in my arms so I was guilty for wanting Rory and guilty for wanting a baby. We thought long and hard about trying again and felt with precautions and medical support we should at least try to give our first son a living sibling.

In our heart of hearts we knew it wouldn’t be easy and for that reason (and to protect our wounded hearts) we didn’t do happy public announcements and literally told only those who needed to know. Three weeks ago we found that again there were placenta problems and this time last week, despite everyone’s best efforts we were told there was no hope. Our baby hadn’t grown in two weeks and was going to die. We made the agonising choice to take control back and end the pregnancy before I got ill. Mercifully before I could be induced on Sunday our baby made the choice for us and slipped away sometime on Saturday surrounded by the warmth of my body. It was strange enjoying a family day out knowing he had gone but I put on a brave face for Matt and Toby.
Induction day came and after an 18 hour labour Henry was born on his daddy’s birthday and Father’s Day.The aftermath is strange, the grief and pain is familiar but very different as I know what to expect and know that I’ll be ok. It is not a shock this time as we knew things could go wrong. That being said, I’m still sad and still missing what our family could have been.

At the end of last week we agreed that having spent 10 years building a family we were done. No more planning, no more invasive procedures, no more counting forward 9 months, no more expense, no more pain. We’re done. Sad but content to remain a three and looking forward to starting a new chapter with Rory and Henry firmly at the centre of our hearts.